Cf. Il.5.845, on which Leaf and Bayfield note:
"The Tarnkappe or Nebelkappe of northern mythology, not elsewhere mentioned in Homer. It is familiar, however, from the legend of Perseus, and alluded to in Scutum Her. 227, Ar. Ach. 390 and Plato, Rep. X. 612 B.
It is a piece of the oldest folk-lore. The name here evidently preserves something of its original sense, the Invisible (Ἀϝίδης).
It is of course not necessary to suppose that the poet conceives Athene as literally putting on a cap; he iobly employs the traditional-almost proverbial-way of saying that she makes herself invisible to Ares."

A fifth-century BCE grave stele from Thessaly (Pelasgiotis) shows the early form of the theonym, with its digamma.

The Dual
Students new to Sappho and Alcaeus may be puzzled by the frequent nominal forms that end in -ω. Snaps to those who ask whether these forms are duals. The dual number is very rare in Sappho and Alcaeus. In short, any such ending is much more likely to correspond to the Attic-Ionic genitive singular -ου.

That end in -ω: none for sure (unlikely in Alc.135).
Alc.43 begins νῶ μέν, which might be either νῶι the dual first person pronoun (Wilamowitz) or a genitive singular of νόος 'in fancy (would...)' (Lobel). 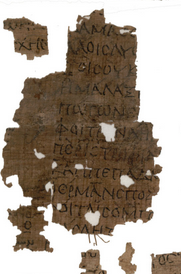