Indo-European warriors in the Hindu Kush

'It is commonly admitted that the parent language possessed an adjectival suffix *-es- which served to create compound adjectives from neuter s-stem nouns. The type is usually illustrated by pointing to equations like δυσμενής = Skt. (not RV) durmanas-, Gatha-Av. dužmanah-, Late Av. dušmanah 'having an evil mind' from which a nom. sg. *dus-menēs is reconstructable.'

An Internet forum featured a discussion of the origins, spread, and modern use of this word in Hindi, Urdu, and beyond, especially on as spoken by a correspondent's grand-mother (!). More at Wiktionary, s.v.

The adjective is familiar from Greek poetry, but also appears in non-literary inscriptions (late 6th c. BC Arcadian; mid 5th c. Cretan  (a) (b)).

In this video, the eponymous faction of the Hezb-e-Islami is seen with its leader Gulbuddin Hekmatyar somewhere in Pakistan or Afghanistan, at some time probably in the 1980s.

Listen to the word they sing over and over.

There's more from or about Hekmatyar elsewhere on Youtube. 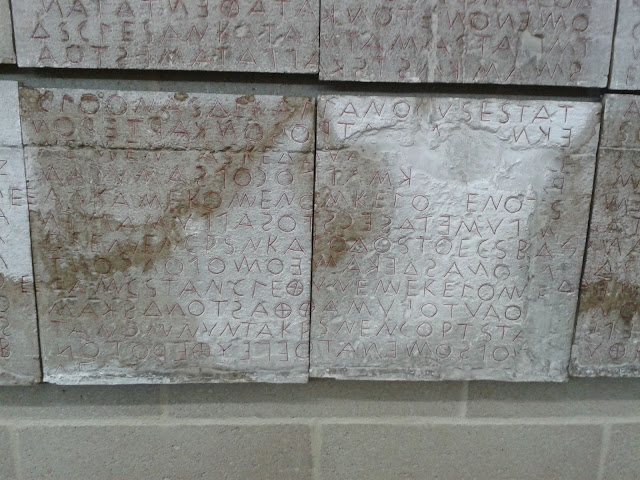 This section is damaged, particularly at this point in this line, as the close-up below shows:

Line 46 is the middle of the three lines in the close-up.

More recent editions have (ll. 46-50): vac. αἰ κ’ ἐδδυσ̣[άμενον] πέ|ραν[νδε] ἐκς ἀλλοπολίας ὐπ’ ἀν|άνκας ἐκόμενος κελομένοˉ τι|ς λύσεται, ἐπὶ το͂ι ἀλλυσαμέν|οˉι ἔˉμεˉν πρίν κ’ ἀποδο͂ι τὸ ἐπιβά|λλον.
'If someone liberates another on account of an obligation towards him from some city because he was found out of the boarder ...' (the translation from a locally-obtained guidebook). Better, Willetts (1967: 44): 'If anyone, bound by necessity (ὑπ’ ἀνάγκης ἐχόμενος), should get a man gone away to a strange place set free from a foreign city at his own request,...'.

We should not conclude too much about the attestation and distribution of a compound adjective from a gap on the stone (and on its casts).