One change between the eighth and ninth editions of Liddell and Scott was the transfer of 'Christian vocabulary' (apart from that of the NT and, if you will, the LXX) to Lampe's Patristic Greek Lexicon.

Some items and a residue remain.

The word ΣΤΕΦΑΝΩΣΤΑΥΡΙΝ is visible in the plate from the original publication in two places: the second half of the first line and at the start of fifth line. 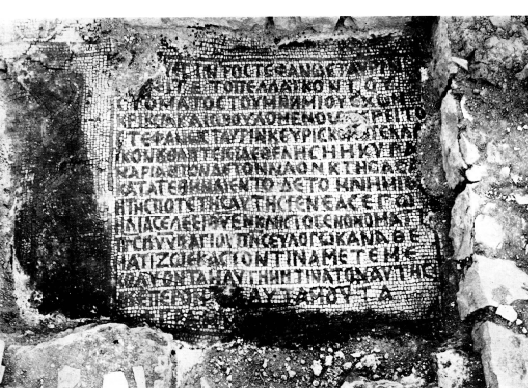 An edition of the text is available at SEG VIII 39 (cf. 40), in which the form is presented as στεφανωσταῦριν.

A piece of the residue is the word τριχοπλάστης, which does not have its own entry, but is cited s.v. πλάστης 1 'perh. = τριχοπλάστης, Plu.Dio9.'.

This noun was included in LS2 as 'a hair dresser, Synes.', that is Synesius, Calvitii Encomium 21. It also occurs in Hesychius as a gloss on κικιννᾶς. Quotation of or allusion to the sentence from Synesius is made in the Suda (s.vv. Ἐξάγιστος, Θηλυδρίας, Θιασώτης).

The passage from Synesius reads:

'[Adulterers love hair]... but the adulterer robs from the soul of the husband the affection he had for her so that the loss of an unfaithful wife is not merely a semi-loss. It is right that the laws have armed the executioners against these men and that gardeners grwo attic radishes with which, if the wrongdoer is caught, the first punishment is promptly administered to him. People of this sort have brought ruin to many households, even to while cities. And resentment over an adultery was the ostensible motive for the conflict between two continents, the crossing of the sea by the Greeks to make war on Priamus' dominion.


Even worse are the kind of people which Alexandros [Polyhistor] showed us, the Cleisthenes' and T{r}imarchi [said to be a governor of Babylon who revolted against Demetrius I Soter in 159 AD, but the target of Aeschines' speech seems more likely, as in this edition of the Greek text].

And there are also those who offer the flower of their youth for money or, if not for money then for some other thing of value or, if not for this, then in order to gratify a perverted carnality. And these effeminates are all, to say it in a word, haircrimpers; some will be found in brothels where they consider themselves a success when they render their appearance as feminine as possible.

But some will keep their vice secret, deny it even by solemn oath; there will be nothing to show that they follow the practices of Cotys [a fourth c. BC Thracian king] except that, when they are making a show of their hair, curl it and apply pomade, all the world will talk of them as devotees of the Chian goddess [Cybele] and as participants in ithyphallic rites.

Pherecydes [a sixth c. BC philosopher] covered his face with his cloak and said "One could tell by the skin" but his finger betrayed the disease; similarly we can tell a dissolute youngster by his hair.'
(translation by George H. Kendal, In Praise of Baldness, 1985,pp. 35-36).

This encomium by Synesius is a response to Dio Chrysostom's encomium of hair (Dio is mentioned by name repeatedly). The work is full of mythological and classical references. Note, as ever, the plurals of personal names for exempla.