The impression of Greek script

German Wings' in-flight magazine for September 2014 presents the name of a city in northern Greece as ΤΗΣSSΔLΟΝIKI. 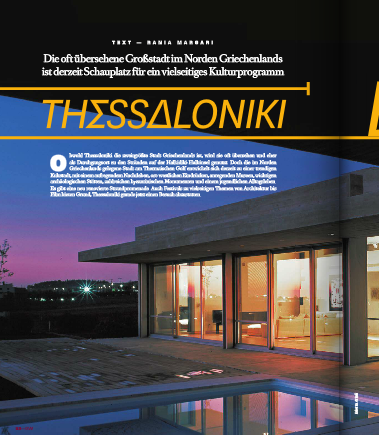 This spelling is part transcription (Th- for Θ and -ki for -κη) and part transliteration (based somewhat on a purely graphic resemblance: Σ for <Ε> and Δ  for <Α>).

Distinctively (but unfamiliar) Greek characters have been avoided (Θ and Λ), but also (mis)employed (Σ and Δ), at the cost of an opportunity to employ them correctly (ΣΣ for SS).

Avoidance of the pan-European and hence unmarked <Ε> and may have been a factor.

The result is a word which is legible to the eye (provided that the delta is treated as an ), but marked as foreign, if not as Greek specifically.