Look-alike: the "Macedonian" kausia in Athens and the North-West Frontier

In 1993, Imran Khan published a fine coffee-table travel book Warrior Race: The Tribal Pathans about the Tribal Areas of North-West Pakistan. Several pictures of him therein bear a striking resemblance to Hellenistic terracottas of Macedonians (found at Athens). 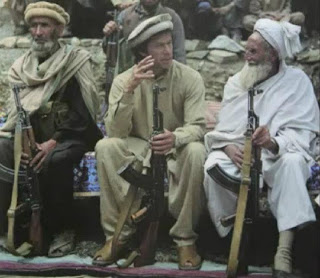 Macedonian boy talks among the tribal Pathans (perhaps the Πάκτυες of Herodotus 7.67.2 ff.) near the Khyber Pass.

More seriously, note the alleged kausia: either a Macedonian import to the Hindu Kush or a warming piece of mountain headgear adopted by Alexander's army from the locals.