Typography, identity, and the name

There is a curious piece of typesetting in LSJ's entry for the personal name Ἰησοῦς. 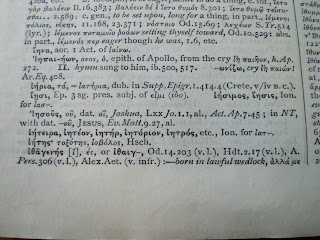 This particular Jesus is distinguished from all others, by a simple typographic variation.

I do not know exactly when this device was first employed in the Liddell-Scott tradition. There is no entry for the name in LS4. It could have been included among those names that the Preface claims "present anything remarkable in their grammatical forms".

In LS6 the name is given in small caps with an explanation that it represents the Hebrew names Jesus and Joshua. We are told there too about the different dative forms.

Although LSJ notes the different forms of the dative, and so informs us about one morphological difference between these the LXX and NT as corpora of Koine Greek, the entry is misleading. Not every Ἰησοῦς in the NT with the dative -οῦ is Jesus or even the Joshua mentioned in Acts 7: 45 (and Hebrews 4: 8). BDAG mentions three others, at least one contemporary with Jesus of Nazareth: 2 Jesus the son of Eliezer Lk 3: 29; 4 Jesus (better known as) Barabbas Mt 27:16 f., and 5 Jesus also called Justus Col 4:11.

Others are named in the LXX too, as well as Josephus, Aristeas, inscriptions from the Augustan period, papyri, and ostraca.