Back in 2007, I noticed the following bilingual inscription near my then gaff. Like so many significant inscriptions, the original has now been lost. 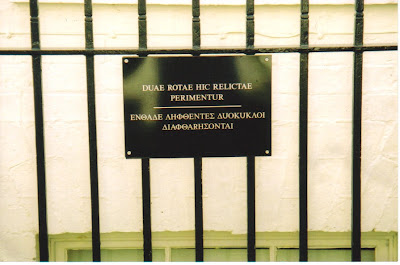 This text provides a potential example of an attempt to make a modern inscription seem authentic as a text from the Hellenistic period, or, more likely, from later on - when the graphic interchange of <η> and <ει> occurred frequently (part of so-called 'itacism'). If we may assume that ληφθέντες corresponds to relictae, it should be an aorist passive participle from λείπω (i.e. λειφθέντες). However, if we reject the proposal of deliberate antiquing through itacism, there must be a mistake; for ληφθέντες could only otherwise be an aorist passive participle from λαμβάνω.