Skunkha was prominent among the pointy-hatted Scythians (ὀρθοκορυβάντιοι, cf. Hdt. 3.92.1) in the late sixth century BCE. His single appearance on the stage of history - his defeat by Darius the Great, King of Persia - is commemorated on the Behistun inscription (http://en.wikipedia.org/wiki/Full_translation_of_the_Behistun_Inscription):

King Darius says: Afterwards with an army I went off to Scythia, after the
Scythians who wear
the pointed cap. These Scythians went from me. When I
arrived at the river,
I crossed beyond it then with all my army. Afterwards,
I smote the Scythians exceedingly; [one
of their leaders] I took captive; he
was led bound to me, and I killed him.
[Another] chief of them, by name
Skunkha, they seized and led to me. Then I made
another their chief, as was
my desire. Then the province became mine.

It would seem that this new chief was none other than Papa Smurf - a natural choice for the jaunty and happy-go-lucky safe-pair-of-hands needed in a client king. 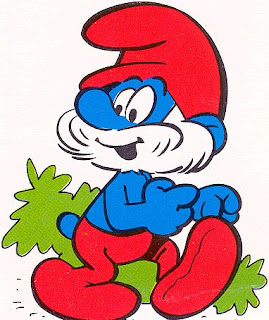